Daughters of the American Revolution

Lisa Jayne, a member of Sierra Nevada Chapter in Reno, Nev., and her husband, Greg, are volunteers for the Comstock Foundation for History and Culture, an organization that specializes in preserving the mining history of the Virginia City National Historic Landmark in Nevada. Last winter, the couple attended a lecture on gold mills in the Virginia City mining district sponsored by the Comstock Foundation and were inspired to do their part in helping preserve this fascinating piece of American history. Today the Jaynes work alongside dozens of other dedicated volunteers from the Comstock Foundation and are led by Executive Director Steven Saylor and board members Donald and Elaine Bergstrom. 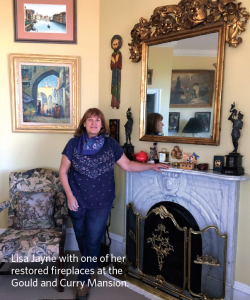 Mrs. Jayne and her husband are especially interested in the stamp mill at the Donovan site in Silver City, which is owned today by the Comstock Foundation and historically important because of its advancements in perfecting cyanide and zinc processing. Led by the Bergstoms, the ore stamps are under repair and—with hard work and good luck—will be operational sometime in 2021. The original mill, called the Kelsey Mill, dates to 1860 and has had several owners, the last being William Donovan Jr., who operated it through 1959. The Jaynes recently restored the 1860s stone foundation and took special care in preserving significant historic details.
Together, the Jaynes also helped rebuild a crumbling furnace that dated to the 1890s. “It has been rebuilt more than once over time as it burned out during the retort process,” Mrs. Jayne explained. Furnaces such as this one were used in the smelting, or retort, process to remove the worthless material, known as gangue, from ore. The furnace at Donovan Mill was used to remove mercury from amalgam. For this rebuild, Mrs. Jayne researched the type of furnace used at the mill before creating a plan of action. The team prioritized the gathering and usage of materials from around the area, including bricks from the mill and an old building site nearby. Some items needed to be purchased from a local masonry yard. Once the materials were gathered, the team cleaned and relaid the bricks; mortared and tooled all of the joints; and secured the furnace for years to come. All in all, the project took 10 days to complete. Mrs. Jayne was a masonry contractor for many years, and this type of hands-on project sits perfectly within her wheelhouse, commencing with her work at the Gould and Curry Mansion in Virginia City and now the Donovan Mill. When not devoting hours to the Comstock Foundation, Mrs. Jayne also volunteers her time at the University of Nevada at Reno as a history researcher. Really, it’s an ideal pairing: she says there is always more to learn with historic preservation projects, and she adores the research process. 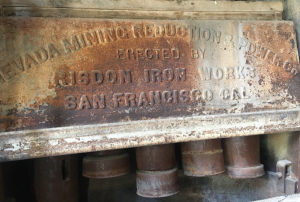 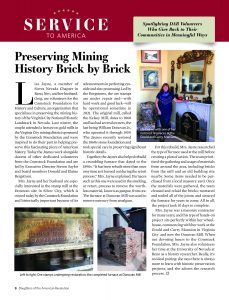