“What Happened to all the Old Buildings” Final chapter part four.

“What Happened to all the Old Buildings” Final chapter part four. 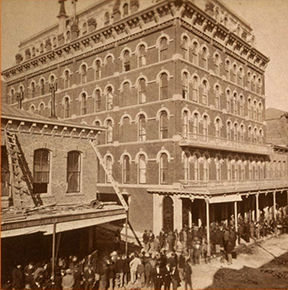 Description: The Comstock’s own Huxsters of History, the VC Relic AKA Ron Gallagher and Prof. E.P. Stinkwater AKA Joe Curtis, will present their 4th installment to sum up the subject of “What Happened to all the Old Buildings” on the Comstock. What were they, what happened to them, what is there now, who owned them and what did they house inside them.  Their intention is to pass on the caretaker duties of the true and relatively accurate history of the Comstock to the next keepers thereof.  Come soak up the Comstock history stuck in their heads and become a Comstock History Caretaker.

Bio: Ron Gallagher, nearly 80, was born as a young child and raised on the Comstock.  His family worked in, owned and operated businesses in Virginia City from the 1870s into the 1950s or so. Ron, contrary to some reports which may be fake news, did not attend the Fourth Ward School as a child.  He did, however go to school.  A career in teaching and private industry and a passion for the history of “his” community places him in a rare position to have absorbed the history.  Ron has researched his family history along with general Comstock history for much of his adult Irish life interspersed with occasional “blarney shots”. 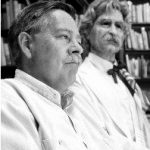 Bio: Joe Curtis, younger than Ron, was raised in Carson to about age 14, his parents purchased buildings and opened a Comstock history museum and also dealt in the history and artifacts of Comstock life.  Joe grew up and later became the care taker of vast stores of original historical source material which he has spent spare time outside two careers researching and stuffing the information into the space between his ears.  It now has to be passed on to the future caretakers of Comstock history while he can remember to do so.  He is one of the most passionate purveyors of accurate Comstock history.  Don’t look him in the eye or he will talk history  to you till you get in your car and drive away.|