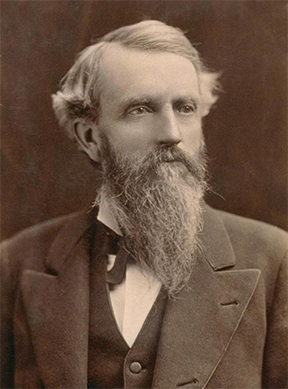 George Hearst of Comstock fame was raised in a log cabin on his family’s farm in rural Missouri.

He headed to California in 1850 for the gold rush. In the summer of 1859, Hearst learned of the wonderful silver assays of the “blue stuff” on what was to become the Comstock Lode. Hearst hurried over to the Comstock where he arranged to buy a one-sixth interest in the Ophir Mine. That winter, Hearst and his partners managed to mine 38 tons of high-grade silver ore, packed it across the Sierra on muleback, had it smelted in San Francisco, and made $91,000 profit, or roughly $2,500,000 in 2016 dollars.

Hearst went on to found the Crown Point Mine in Gold Hill and the Flowery Mine in Six Mile Canyon. He built an empire of mines and achieved his goal of owning the largest gold and silver mines in America. The company grew to be the largest private mining firm in the United States.

His son, William Randoph, took control of one of his father’s holdings, the San Francisco Examiner, which became the foundation of the Hearst publishing empire. George Hearst bought the newspaper as a sign of loyalty to his friends by accepting it as payment for a gambling debt owed to him.