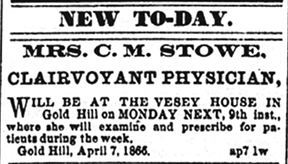 Description: Mrs. C.M. Stowe was a prominent Spiritualist who traveled the Pacific Coast during the 1860s and 1870s giving lectures and offering her many clairvoyant talents.  She appeared at the Vesey House (later known as the Gold Hill Hotel) in April of 1866 to lecture and offer clairvoyant physician services.  Stowe was a speaker, as well as medical and business clairvoyant.  She was well respected by both believers and non-believers of the Spiritualist movement during a time when America was grieving the loss of loved ones lost in the battles of the American Civil War, and struggling to connect with them once again.  She was also an advocate for woman’s rights and a respected heroine reformer. 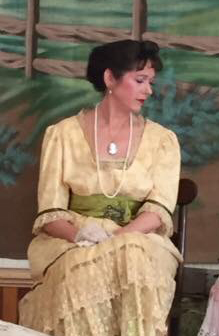 Harris currently serves as president of the Friends of Snowshoe Thompson organization in Genoa. She is also the Events Manager at Dangberg Home Ranch Historic Park in Minden, NV, and is the owner and operator of Western History ALIVE!  where she portrays several Chautauqua characters that helped to shape Northern California and Nevada’s early days, as well as the West.

Harris was born and raised at Donner Lake, CA growing up immersed in the history of our West.  She enjoys not only sharing what she has learned about our history, but continuously learning from those that have livehttp://goldhillhotel.net/event/lecture-series-continues-clairvoyant-spiritualist-physician-mrs-c-m-stowes-appearance-in-gold-hill-1866/d it themselves.