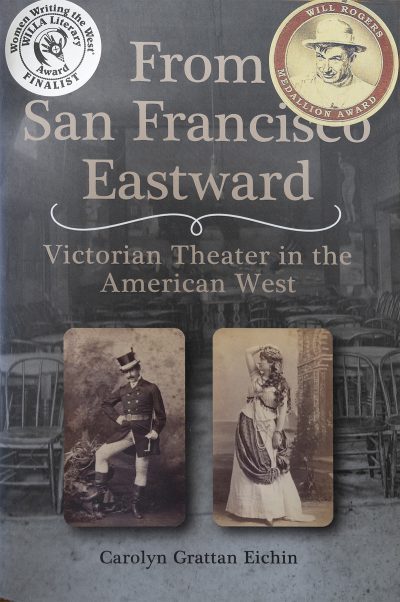 Carolyn’s talk on September 8th will focus on her research and conclusions about Western Victorian theater during the mid-1800s.  The book focuses on the American West drawing on San Francisco’s prominence and its relationship with the smaller theaters.  The talk will use many examples from Nevada’s prominent theaters including Piper’s Opera House in Virginia City, as well as introducing the audience to many of the actors and theater managers who brought entertainment to the smaller towns of the West. The book will be available for purchase at a discounted price.

BIO: Carolyn Grattan Eichin has lived her entire life in the American West. Residing in Nevada for more than 34 years, she attained both a BA and MA in history from the University of Nevada, Las Vegas, as well as completing the course work for a PhD in the history of the American West. For seventeen years she maintained a relationship with the College of Southern Nevada teaching American history, Nevada history, and anthropology as a member of the adjunct faculty. Other work experience includes a stint as an archaeologist and a bed and breakfast owner with her husband in Virginia City, Nevada. She has published articles in the following journals: Nevada Historical Society Quarterly, Utah Historical Quarterly, and the Mark Twain Annual. From San Francisco Eastward, Victorian Theater in the American West is the culmination of many years of research and her first book.  The book has received two literary finalist awards.  The book placed with only one other finalist in the Willa Literary awards from Women Writing the West in the scholarly non-fiction category, and placed as a finalist in the Will Rogers Medallion Awards in Western non-fiction with four other books.