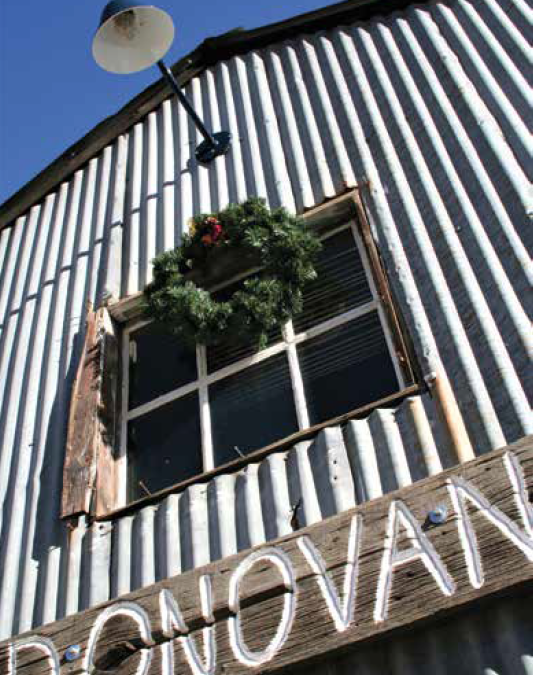 Melville Kelsey bought the original parcel for $1,500 in 1861, building the Kelsey Mill with 15 stamps and a 40-horsepower boiler. Hard rock miners Felix Lacrouts and Napoleon Landry, with Virginia City liquor dealer Jean Dazet’s financial backing, built the Dazet Mill in 1890 with ten stamps.
Now known as the Donovan Mill in Silver City, it’s a significant landmark in Comstock history as well as for the mining industry. It represents the location where the cyanide-zinc process was revolutionized in a way that set the stage for the next 124 years in precious metal mining.
The use of cyanide and zinc for the retrieval of precious metals was conceived originally in Sc tland in 1887. Limited testing in New Zealand and elsewhere proved the value of the process. In 1896, Professor Robert Jackson from the University of Nevada School of Mines adapted the idea and perfected the process, especially for Comstock ore. He conducted tests on Comstock mill tailings, and then at the turn of the century, he set up a more formal operation at the industrial complex now known as the Donovan Mill today and the Dazet Mill or Jackson Cyanide Plant.
The success of his experiment opened the door for the industry to cease using mercury for processing gold and silver ore, arriving at an approach to milling that was more efficient and better for the environment.
When Jackson and his partner Dr. J. Warne Phillips outfitted the mill for cyanide processing, they added tanks and rooms to the south. Phillips eventually bought out Jackson, then sold the mill to William Donovan, Sr. in 1912.
In 1938, his son William Donovan, Jr. purchased twenty stamps from the Rock Point Mill (Nevada Mining, Reduction, and Power Company) in Dayton. He added these four 5-stamp batteries to the family’s third expansion of the mill, which completed a bank of thirty industrial pistons, designed to pound ore into powder.
Donovan Mill was shutdown in 1959 and boarded up in 1975. In 1980, the site was added to the National Register of Historic Places and the Comstock Historic District. The Comstock Foundation for History and Culture bought the Complex in 2014 for $195,000. When purchased six years ago, the east wall was failing and with it came the risk of losing the Dazet structure. The main roof support beam in the mill was at the brink of dropping and if it collapsed, the entire roof would have caved in, also needing shoring up was the southwest corner of the structure and the zinc press room.
The cost to repair the site was estimated to be around $4 million. “We still have a long way to go, “Elaine Bergstrom of the Comstock Foundation for History and Culture said. “In fact, we’re still busy with the conservation of the many buildings.”
The Foundation soon discovered, that though the structure had significant problems, five of the thirty original stamps could be placed back into operation. So, between March and December 2020, volunteers logged over 4,500 hours to repair, replace and refabricate the old facilities.
Some of the work included replacing the 100 pound dies of Stamp Battery #4, which were provided by Millwright Charlie Connell of Phoenix, AZ. Meanwhile, machinist Garrett Ulmer in Moundhouse, was able to taper the dies so they would fit into the bottom of the battered mortar box.
The machine shop’s blacksmith equipment; a lathe, drill press, hack saw, and a trip hammer were quickly put back into operational order along with the installation of a pulley and belt system for main line shaft to drive secondary line shaft. Meanwhile, a hood for the forge was donated by the Arizona State Museum and a new chimney cap and flange installed.
Masonry work for the forge foundation was completed as was the brickwork on the mercury retort, south of the refinery. Other rock work included the reconstruction and re-pointing of the stone wall in ‘root cellar.’ and the Dazet Mill’s east wall.
It’s believed that the east wall in the ‘root cellar’ may be part of the original foundation from the 1860’s Kelsey Mill.
A 12-by-24 jaw ore crusher was installed with its newly refurbished 40 HP electric motor. Though rotated by hand, following a cleaning and inspection, it’s the first time the reduction gear box and shaft bearings have moved since 1959. This wasn’t the only motor obtained during this season; a 50kw generator from Frank Pedlar to provide power to a 3-phase stamp mill motor. A 1926 55 HP Ingersoll Rand oil engine, was also donated by Brad Keife and was moved from Wadsworth to the mill.
Volunteers installed a wood bridge, donated by Burdick Excavating, over Gold Creek providing a walkway to the mill from the south end of the site. Also the restoration of the building structure holding the crusher, ore bin, and grizzly was completed.
“The southeast corning of the building was so badly damaged that part of the conveyor system and a motor were hanging out of the wall,” Bergstrom said. “We had to use straps to pull that part of wall up before we could do anything else with it.”
The Foundation received donations of an 1880’s Virginia City desk, some oil lamps, and several boxes of historical documents, including time cards, milling records and newspapers. With this came a large format reprint of an 1870’s glass-negative photograph of the mill and trestles located west of the mill.
With Donovan Mill and the surrounding site’s restoration nearing the point where Stamp Battery #4 can be switched on and ore crushed, the Foundation anticipates that the site will one day serve as an interpretive center, housing various arts and crafts and micro businesses associated with the historic period of the Comstock. 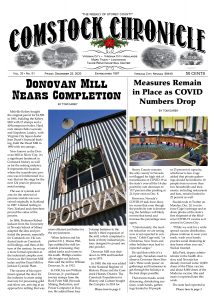