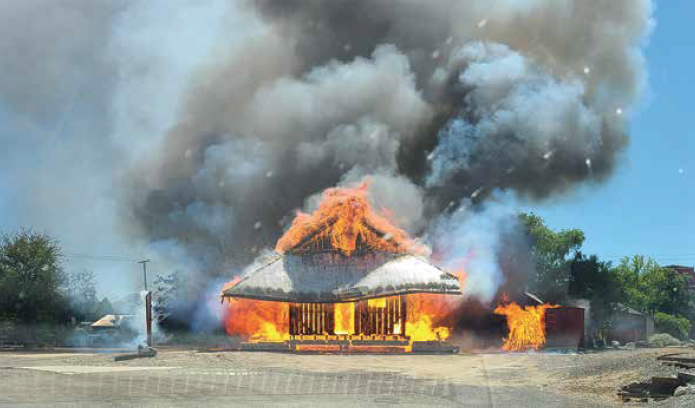 
On Wednesday, June 17th, Dayton was dealt a blow when the historic 1881 Carson and Colorado Railroad Depot on the corner of Highway 50 and Main Street burned to the ground, fanned by strong winds out of the north-northeast. The depot is one of three remaining Carson and Colorado Railroad Depots and the only one remaining in Nevada.
Lyon County owned the land and the depot. The Historical Society of Dayton was doing the restoration. The Carson and Colorado Railway was a three-foot narrow gauge railway that ran from Mound House in Nevada to Keeler, California. Construction began on the railway on May 31, 1880. The history of the depot is long and hard to follow without a timeline, but the depot was moved a number of times and was modified over the years when it was used as a residential home. The fire, now called the Dayton Depot Fire, was called in at 3:35 by Alicia and Christian Greenwood .
“It looked like a little campfire inside the building”, said Christian Greenwood. Alicia Greenwood added, “If it was just something that started out of thin air, there was nothing that could be done about that because of all the dry kindling all over the place, but it looked intentional in my opinion.”
According to Central Lyon Fire Chief Rich Harvey, “The first engine was on scene at 3:31 pm from Station 35.” Assistant Fire Chief Ryan McIntosh of Central Lyon Fire said, “The depot was well involved in the interior with signs of exterior involvement on the northeast corner when we arrived.”
“We had a Lyon County Sheriff’s Deputy at the Sinclair filling up. He saw the fire when he heard the tones and by the time he was able to make it across the intersection to the building, he looked in
the building and it was fully involved and rolling across the ceiling,” added McIntosh. McIntosh continued, “Obviously that old train depot has been vacant since it’s relocation and was not boarded up, so it was not controlled for access. That was an old timber building, very heavy fire loading in the structure and it was indefensible by the time really, is you don’t set out to determine what caused it, but rather what didn’t cause it. We know it was not lightening. There wasn’t any that day,” said Chief Harvey. “There were no power surges because there was no power to the building. No one was working in the building, so it wasn’t caused by power tools. There was nothing stored in that building. The Historical Society was very careful not to have anything that could start a fire.”
The State of Nevada Fire Marshall’s Office was called in to assist in the investigation. According to Harvey, “They brought in what is called a ‘sniffer’. It is a high tech device that samples the air around the fire, to see if there is anything there that smells funny. We also took samples from around the fire and those have been sent off to the lab to be analyzed.”
The sniffer smells the air around the fire, looking for hydrocarbons. The sniffer test was positive and the lab results from the samples have not been returned.
Harvey said, “We have a strong suspicion that human intervention played a part in what happened at the Dayton Depot.” The ongoing investigation includes viewing video from the surrounding businesses, cell phone video from passersby and eyewitnesses. The CLFPD has been in contact with the Lyon County District Attorney and will submit their results as soon as possible.
Chief Harvey was very pleased with the performance of his district, as well as the assistance from the sheriff’s office and the coverage sent by Carson Fire, Storey County Fire and East Fork Fire. “In the situation that they had, they did a really amazing job. Battalion Chief Ryan Johnson was the incident commander and coordinated three structure fires within a block or two of the Dayton Depot fire. He still handled the medicals, handled the traffic and he and all the firefighters did a phenomenal job.
Johnson did a real good job of prioritizing, making sure we had people where they were really needed. Everybody was safe and everybody had a good plan of attack,” added Chief Harvey. Chief Harvey did add that one of the engines backed into a fence post and popped a tire. “So during all of this, we also had to change a tire,” chuckled Chief Harvey.
Chief Harvey closed with, “The Lyon County Sheriff’s Office was outstanding. Those guys did a great job with the traffic and crow control.” “We did a really good job but it’s hard to say that when the heart and soul of Dayton Burns down. It was a good job keeping it to what it was. It could have been much worse with roofs catching on fire all over Old Town Dayton. It could have been so much more without a solid response, but it’s also very sad,” closed Chief Harvey.
The Dayton Valley Dispatch will follow up on this story as more information becomes available. 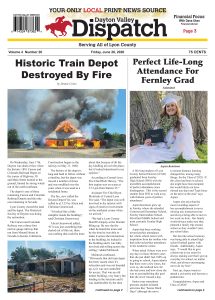