The Comstock Foundation for History and Culture encourages the preservation and promotion of historic and cultural resources within the Virginia City National Historic Landmark District.

The 19th century mining bonanza turned Virginia City into the most important industrial city between Denver and San Francisco, and it turned destitute prospectors from all over the world into instant millionaires.

In the late 1850s, silver and gold were discovered in this area and the resulting camp was little more than a few miners living in tents and crude shacks. By the early 1860s, however, the town of Gold Hill grew to rival Virginia City in size and population.

In 1861, Silver City featured boarding houses, saloons, hotels, and a population of about 1,200 people. The town became an important freighting center to serve travelers between the Comstock mines of Virginia City and the processing mills near Dayton and along the Carson River.

The Comstock was born in Gold Cañon, the site of Nevada’s first gold discovery. Nearby Dayton became Nevada’s first permanent settlement in 1851, and was also the site of the state’s first Chinatown, and home to Lyon County’s first courthouse.

Entrepreneur Adolph Sutro believed that a tunnel, excavated to intersect with the lower levels of the Comstock, would efficiently drain and ventilate the mines. Unfortunately, the Sutro Tunnel opened as the Comstock mines declined.

Restoring the Legacy of a Nation.

The Comstock Historic District is one of the most important National Historic Landmarks in the
United States of America. At over fourteen thousand acres, it is also one of the largest.
The district includes Virginia City, Gold Hill, Silver City, the historic part of Dayton, and the historic site of Sutro.
The Landmark commemorates a long history of remarkable achievements in the field of mining. 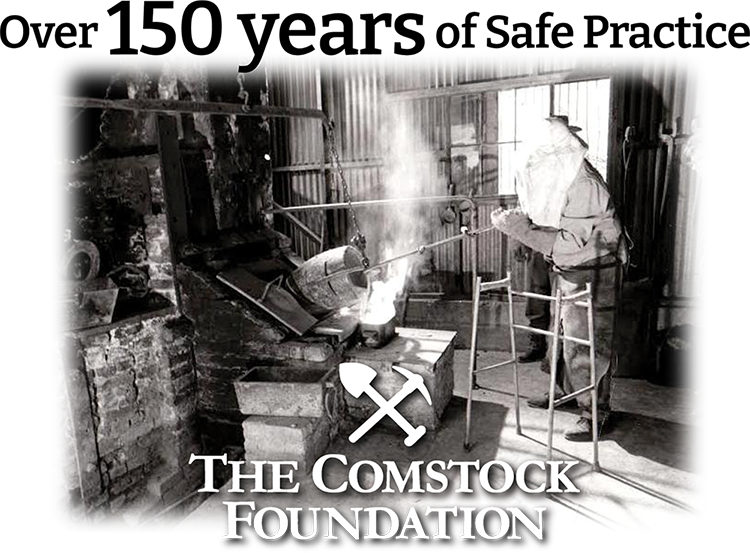 Yes, mining is a dangerous business, but for those who want to SAFELY learn more about the Comstock Historic District, we’re now following all COVID-19 Prevention Guidelines. The Comstock Foundation for History & Culture offers many COVID-safe ways to experience the rich mining history of the Comstock area including: 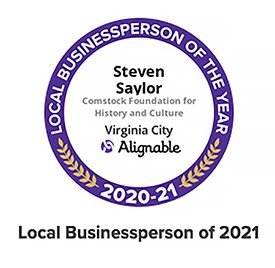 “It’s truly an honor to receive Alignable’s award for Business Person of the Year 2020-2021 in Virginia City. I’d like to thank all the local merchants, residents and nonprofits who voted for The Comstock Foundation for History and Culture. This award is really for the community we serve and we are proud to be a small part of what makes Virginia City a great place to be.” ~ Steven Saylor, Executive Director 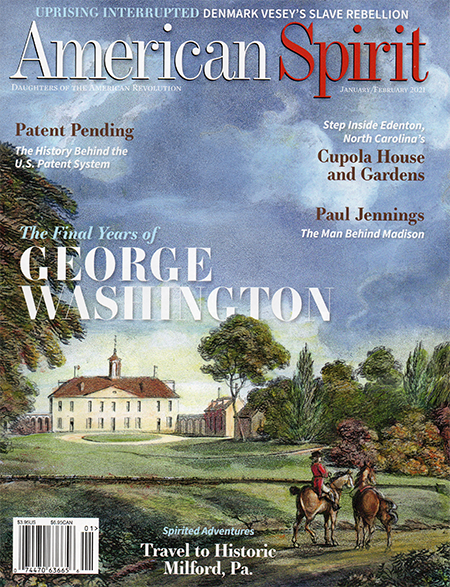 Daughters of the American Revolution Lisa Jayne, a member of Sierra Nevada Chapter in Reno, Nev., and her husband, Greg, are volunteers for the Comstock Foundation for History and Culture, an organization that specializes in preserving the mining history of the... 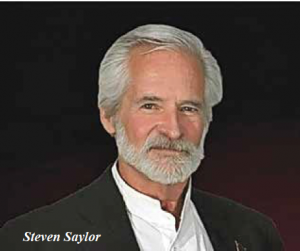 Steven Saylor, Executive Director of The Comstock Foundation, has been elected as the position of Second Vice- President of theNevada Museum Association.
The NMA provides support to the state’s 100+ museums by offering learning opportunities through a quarterly newsletter, annual conference and other informational workshops held throughout the year.

As the Second Vice-President for the NMA, Saylor’s responsibilities will include maintaining membership records and for the collection of dues which, are then forwarded to the treasurer of the association.

The new museum Saylor is referring to will be located in the old Cabin in the Sky restaurant in Gold Hill. The Chronicle will be reporting more on the plans for the new museum in the following weeks. Much of the work that Saylor performs for the Comstock Foundation is grant writing.

“Being the Second Vice-President of the Nevada Museum Association looks really good on the resume when I submit a grant application,” added Saylor. Saylor continued, “We have a lot of wonderful museums in Nevada and right now, a lot of them are shut down or have very limited accessibility. There is a lot of competition right now for grants and funding due to COVID-19.”
The NMA held their virtual Annual Conference on October 23rd, which Saylor participated.

Saylor’s love of Comstock history has played a major role in his life in Dayton. He has tirelessly shared his love for the Comstock with others through lectures and tours of historical sites. As Executive Director of the Foundation, Saylor is focused on the preservation of the Virginia  City National Landmark District as one of the most important National Historic Landmarks in the United States.
At over fourteen thousand acres, it is also one of the largest. The district includes Virginia City, Gold Hill, Silver City, the historic part of Dayton, and the old town site of Sutro. The Landmark commemorates a long history of remarkable achievements in the field of mining.

Saylor is also known as a fine artist and operates a studio to display his artwork, Evergreen Studio. The studio is located in a V&T RR Carson and Colorado Railroad 1800’s baggage car next to his home in Dayton. His artwork can be seen at evergreenstudio.com.
Saylor shares his love of art and photography as an adjunct Professor at Western Nevada College in Carson City. Saylor also was a working cowboy from 1974-1982 in the Dayton Valley. He first worked for Tennessee Ernie Ford’s Allran Ranch and then with the Rolling A Ranch.

As an artist, Saylor is a member of the Society of Illustrators, American Portrait Society and was a founding member of the Board of Trustees for the Foundation for the American Western Art and Cultural Exchange.
Saylor also has an extensive background in mining and geothermal development. Saylor lives in Dayton with his wife Johnye. If you ever drive up near the Dayton Cemetery and see or hear the call of peacocks, you are close to their home. For more information on the Comstock Foundation, please visit their website at comstockfoundation.org. 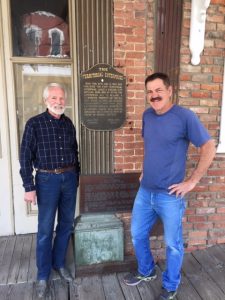 An Open Letter to Virginia City

Among the 200 Twain scholars I’ve communed with over the past 40 years, Virginia City has been their biggest disappointment.  Hannibal, Hartford and Elmira boast Mark Twain’s profile in grand style, and our Comstock Fathers & Mothers should visit there.

Mark Twain has a wider reputation, is better known nationally and world-wide than Virginia City, and many Comstock residents would be quite surprised to hear that.

It’s time we recognize and celebrate the literary birthplace of America’s best loved author, Mark Twain; time for Virginia City to take her rightful place of honor as the lodestone of the enduring literary compendium of one Samuel Langhorne Clemens.  Commemorate it and they will come.

Our intrepid Executive Director of the Comstock Foundation for History & Culture, Steven Saylor, along with the propitious new owner and renovator of the Territorial Enterprise Building, Tom Hayward, will be leading the way.
I see a new dispensation dawning over Virginia City…

With great love for the Comstock Lode,

I remain your faithful servant and friend, 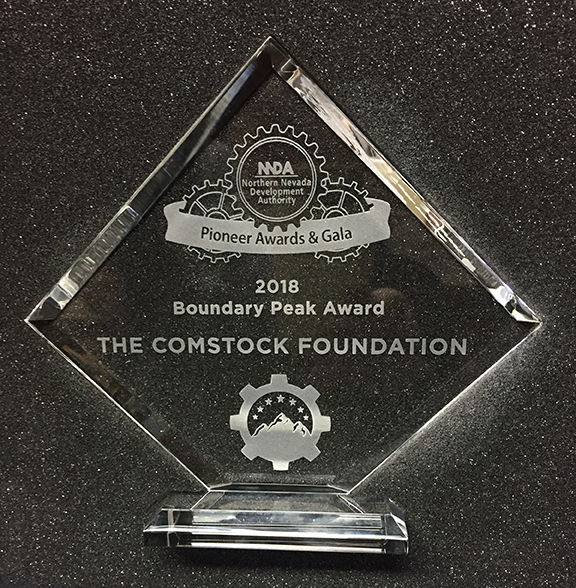 The Comstock Foundation for History and Culture was the recipient of the Northern Nevada Development Authority’s Pioneer/Boundary Peak Award as best non profit in 2018. The Comstock Foundation has worked since 2014 to rebuild historic structures and encourage the preservation and promotion of the historic and cultural resources within the Virginia City National Landmark District. 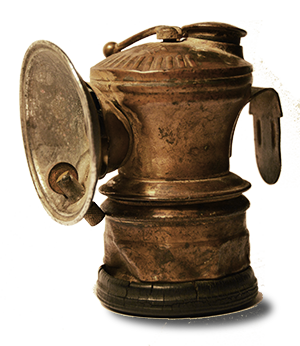 Become involved and preserve history.
Are you interested in helping the Comstock Foundation with their efforts in preservation and promotion of historic and cultural resources within the Comstock Historic District? Support preservation and donate below. CLICK HERE to become a volunteer or below to donate: